Brian “Boomer” Ward believes in sheltering strays. After all, the men and women of McKay-Taggart made him family when he had none. So when the kid next door needs help one night, he thinks nothing of protecting her until her mom gets home. But when he meets Daphne Carlton, the thoughts hit him hard. She’s stunning and hardworking and obviously in need of someone to put her first. It doesn’t hurt that she’s as sweet as the cupcakes she bakes.

Daphne Carlton’s life revolves around two things—her kid and her business. Daphne’s Delights is her dream—to take the recipes of her childhood and share them with the world. Her daughter, Lula, is the best kid she could have hoped for. Lula’s got a genius-level intelligence and a heart of gold. But she also has two grandparents who control her access to private school and the fortune her father left behind. They’re impossible to please, and Daphne worries that one wrong move on her part could cost her daughter the life she deserves.

As Daphne and Boomer find themselves getting closer, outside forces put pressure on the new couple. But if they make it through the storm, love will just be the icing on the cake because family is the real prize.

**Every 1001 Dark Nights novella is a standalone story. For new readers, it’s an introduction to an author’s world. And for fans, it’s a bonus book in the author’s series. We hope you’ll enjoy each one as much as we do.**

*Disclaimer: I received an e-ARC of this book from Social Butterfly PR in exchange for an honest review. This does not influence my rating or the content of my review in any way.

**Disclaimer: This book contains mature content. As a result, my review may contain references to content intended for mature audiences only.

Listen, I know I say this a lot, but it happens to be true every single time: each time I sit down to read a Lexi Blake story I know I’ll have a very good time, and Delighted was no different. I was surprised, shocked, brought to tears, and amused a lot reading this book.

I love Boomer even more after reading this story. Reading about his struggles growing up and his background in general made me want to hug him and never let him go. I loved that he found a new family with the McKay-Taggart crew, because that is really a loving group of people. Boomer’s sense of loyalty and of helping others out of the goodness of his heart is something that’s been mentioned a lot in the past, but we get to understand Boomer’s view on what helping others means for him, and I really loved him for the way he explained it. Boomer doesn’t put conditions on when and how he helps people, or on the way his help should be used so to speak. He trusts people when they say they need help, and he helps them if he can. Boomer is just a giant lovable teddy bear and he needs to be protected at all times.

Daphne was a good heroine for Boomer. She has her own skeletons, her own traumas to face. I kept wishing she would stand up to her mother-in-law, but a part of me wonders if she’s always been afraid of what that woman could or would do. I loved seeing Daphne struggling with doing what was right for her child. I really loved that aspect of the story, because I imagine it can be quite scary trying to balance what you think is good for the child with the knowledge that it might actually not be the best for them. And I think Daphne had a lot of good scenes where that exact thing was showed. I did have an issue with how she reacted towards the end, when some stuff happened. I understood her, but I also wish she would have chosen different words to express her frustration and fear.

This book had many great awesome found-family scenes, especially when Lou, Daphne’s daughter, meets the Taggart kids and they adopt her into their group. It was really awesome to read, because it showed what a good group of friends can do for a person. And it was honestly a given that the Taggart kids would adopt her as a sister.

The epilogue was epic. I won’t say more, because I really don’t want to spoil it for anyone, but it was epic. And it makes me do a lot of happy dancing while waiting for the next books in this world.

Overall Delighted was a delightful addition to the world (see what I did there? Yes, I’m proud!). Lexi Blake has once again delivered a story full of romance, friendship, drama, family. It’s a really good story and it helped with my need for more books in this world. 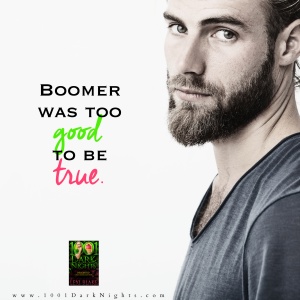 “It was a rough day. I could use a hug, if you don’t mind,” she said, trying to hold back tears. “The oven is going to die soon, and I don’t have the money to fix it, and I’m going to fail.”

His arms came around her, and she breathed him in. He smelled clean and crisp, like a spring wind. Her brain knew it had to be soap, but she associated the smell with him, and it soothed her.

“It’s okay.” He rocked her a little. “I’ve got a friend who is good with appliances. I can ask her to look at it. Don’t worry, Daph. It’s going to be all right. Lou’s good here. I promise. Lou’s good, and you’re going to be okay. I can’t let you go under or Big Tag would get mad at me. He really likes lemon cupcakes.”

They stood there for a moment, his warmth melting some of the ice that had built up over the last several years.

She tilted her head up, and that gorgeous man was staring down at her like he could eat her up, and warm was no longer the word she would use.

Hot. Desire flooded her system like a flash fire, and she wanted nothing more than to go up on her toes and kiss those magnificent lips of his.

Those lips belonged to another woman, and that woman was in the building. What the hell was she thinking? He was a nice man. He didn’t want to kiss her. He was being kind.

She stepped back, wiping her eyes. “Thank you, Boomer. And if you do have someone who can take a look at the oven, I would so appreciate it. You get all the cupcakes. What kind does MaeBe like? Would she be okay with the hugging thing?”

He frowned, like he was trying to figure something out. “I hug Mae a lot. At least I used to. She’s not so huggy these days. She likes anything chocolate.”

Boomer had looked sad when he’d said Mae didn’t hug him much anymore. She hated the thought of this big cuddly god of a man being in a cold relationship, but she wasn’t going to be the reason they broke up.

“Then I will make her something chocolate, and the lemon ones for your boss,” Daphne promised. She had to get these crazy urges under control or she would need to find Lou another place to stay, and she got the feeling Lou would object. “So where is the lounge? Or the gulag. That one kind of scares me.”

“Kala? Oh, that proves you have excellent instincts.” Boomer turned to walk back down the hall.

Those heads were back up above their cubicle walls, and she also noticed the doors to a whole bunch of offices were open.

“Is there a reason everyone is watching us?” She hurried down the hall to catch up with him.

“Because they’re all nosy bastards, and I can’t even complain,” Boomer replied. “I was a nosy bastard, too. We’re a weird family, and everyone is always in everyone else’s business, but it’s not a bad thing. The kind of people who would take advantage get weeded out very quickly around here. Big Tag takes care of them, and there’s usually a lawsuit, but that’s what Mitch is for. Hey, we also have a criminal defense attorney on call. Her name is Lea, and she’s really scary. Now if she had been working the reception desk when we invaded, we might have had trouble.”

She loved listening to him talk. His voice was deep, but every word was tinged with the humor he seemed to have for the world around him. The positive light he exuded was always there in his words.

If only the man weren’t attached…

She shoved aside the thought because he was totally out of her league. They weren’t even playing the same game.

But maybe they could be friends.